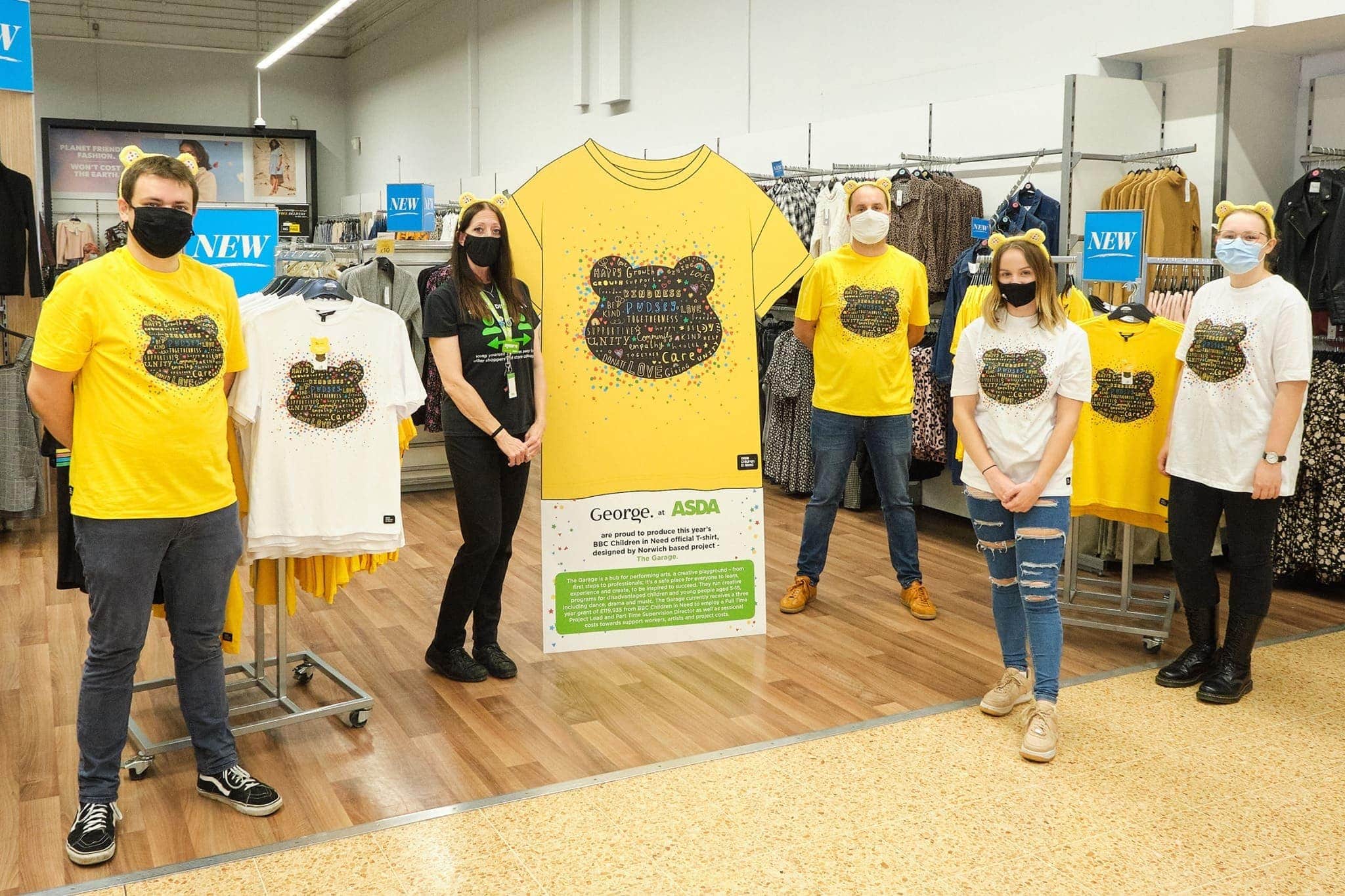 In the last three weeks before the first Covid-19 lockdown, Rhia was among The Garage Youth Forum members presented with an amazing opportunity – they had been selected to design the official Children in Need T-shirt 2020. She picks up the story.

Luckily for us, we finished the designing process the week before lockdown, allowing the T-shirt to have been fully created in person, rather than over calls and web meetings, which would have made the whole process a lot more difficult. The prospect of creating something that would be sold nationally was a daunting one, but with the support given, it became less scary and more enjoyable.

We had the help of several amazing George designers, who showed us how they design clothes in their industry, which was quite an epic process to witness. We started the first week by writing a list of words about Children in Need –  unity, kindness and community being some of the most popular. Once we had our list of words, we set about drawing shapes onto T-shirt cut-outs.

We were given a pile of about 100 sheets to sketch on with our rough ideas, which we revisited and refined later on. During that first week, we gathered our thoughts on what we each perceived to be the spirit of Children in Need and shared them with the extended group. We ended up covering the whiteboard in our room with words depicting the type of organisation we were designing for – kind, supportive and unified.

During the second week we began to think what we wanted the final product to look like. The designers told us about their designing methods to inspire our creativity as they let us scribble down as many images, phrases and doodles as we liked. We ended with a pile of about 80 full designs from the six Youth Forum members. It was a fun-filled evening of discussing ideas and debating styles and shapes until we ended with a general consensus, we liked confetti a lot!

To help us fully get to grips with how the actual designers worked, a few of us got to try a drawing pad connected to the laptop. This enabled us to see how raw ideas could be refined into functioning designs. Towards the end of the session, the more tech-savvy of us had a crash course in editing software, as the rest of us blended ideas from the templates into a more cohesive design.

On the third and final week, we spent the first hour finalising our design – a silhouette of Pudsey, with confetti around and our words within. To make this project fully our own, we took several sheets of paper each and began doodling as many different type fonts as we could think of, most of which ended up being used on the final T-shirt.

These would soon be uploaded to the computer, before being printed onto the T-shirt to be sold in the upcoming days at Asda. By the time we had all agreed on every minute detail, the session was finished and our initial work was done.

During the last hour, a few other members and I were taken aside to be filmed for a quick interview. This was probably the most scary part of the process for me, as it was a new experience. The questions revolved around the project and The Garage, both of which I had lots to say on.

After the interviews, we were filmed as a collective discussing the design and had several photos taken; it was truly an incredible experience. Sadly, 7pm soon rolled around, signaling the end of our designing careers for the near future.

Even after the initial designing process was over, we still had lots to do for Children in Need. On 19 October, fellow Youth Forum members Josh and Molly joined me at a photoshoot at Asda to celebrate the launch of our T-shirt. We were joined by the managers at the Drayton High Road branch, along with Youth Forum leaders Adam Yaxley and Sam Webber.

We were photographed in store while wearing our T-shirts with a giant cut-out behind us. The photos were released in local news outlets such as the EDP, Norwich Evening News and on the official Asda website. A few days after, we saw both the photos from Asda and a video of the interviews from before lockdown beginning to circulate on several news channels and social media. It was definitely quite a surreal experience to see myself in the newspapers.

On 29 October, Josh, Adam and myself, along with several others who have studied at The Garage in the past few years, also took part in a Zoom call with Una Healy of The Saturdays. This will be coming out soon as a short social media film.

Overall the experience was a very rewarding one and it felt amazing to be able to give back to both Children in Need, which does such amazing work for young people, and The Garage, which has been an important part of my life for the last seven-and-a-half years. This opportunity has helped the members of the Youth Forum in many different ways, by giving us a chance to do things we might never have been able to do otherwise.

By designing the T-shirt, we have all become more confident on camera and it’s been a huge self-esteem boost in seeing all the positive feedback to both the T-shirt and the various photos and videos. I’m sure the other members of the Youth Forum will agree when I say it has been an absolute honour helping Children in Need this year by creating their official T-shirt.

Estella, from George, said: “It’s been a real privilege to work alongside these amazing young children to design this year’s official BBC Children in Need T-shirt. They have all shown real creativity and passion in their work and I’m delighted they can see all their hard work come to fruition.”

The T-shirts are available in store and online now at £8 for adults and £6 for children, with 48% of the profits going to BBC Children in Need.