The beautiful French city of Rouen and our own fine city of Norwich have enjoyed a long and fruitful friendship. Several weeks ago, our HNC Programme in Performing Arts students explored both.

Organised through both cities’ Twinning Associations, they will draw on both places’ similarities and differences to create and develop a performance, using sound recordings, experiences, conversations and imagery collected during their eye-opening journeys.

Keira picks up the story.

“On a cold November morning myself and two other students, along with one of our tutors from The Garage, found ourselves standing at Norwich train station at the start of our journey to Rouen. Twelve hours later, we were greeted by Jacqueline, the representative from the twin city council.

“She was an absolute angel and bought us pastries, milk, jam and bread. She then showed us all the best places to visit and explore.”

One of the highlights was attending Rouen’s This Is England film festival, which was happening at the same time as The Norwich Film Festival.

Student Dylan said: “The short film programme was a selection of films from the 2020 festival, which had been stopped by the pandemic.

“Where’s the Butter Betty was the first audio heard from Betty by Will Anderson, hilarious animation narrated by the director as he explained his reasoning behind why he made the film – his struggle and its true meaning.

“Another highlight for me in this selection was Motherland by Ellen Evans. It followed two young men who were forced to move to Jamaica after spending their lives in Britain. This heart-wrenching documentary shone a light on deportation factors that aren’t talked about.

“After the films a Q&A started with a few of the directors, which was a nice way to connect with the filmmakers and learn more about the film. There was a waiting area where we could meet them.

“We were introduced to Ciara and Ross, who create animations using pen and paper, using a lightbox to redraw every image. This created real artistry and added style to their work. It gave me a glimpse into the detail of the artists’ practice.”

Fellow cohort Keira also enjoyed watching the films and meeting the creative teams who made them.

She said: “Afterwards, we attended the after party which was a punk rock concert. I was surprised when I walked in and there was a punk rock band from Bristol performing. I was expecting a French band!”

Their first full day in Rouen had begun by exploring the medieval part of the city. They wandered round the cobbled streets, did some window shopping in the antique shops and in Keira’s case photographing every building she possibly could.

“That afternoon we met up with Le Safran Collectif, a local group of artists. We watched a rehearsal for one of their shows which was mimed and extremely enjoyable.”

A visit to the city’s museum of fine arts the same day gave student Liv food for thought.

She said: “The museum had a wide range of religious art as well as art showing death in different forms. It was filled with beautiful white sculptures, next to which were massive paintings that reached the ceiling.

“The paintings were so big that the people depicted in them were taller than us. They were so realistic it wouldn’t have felt out of place to walk over and have a conversation with them.

“I left the group and explored the paintings alone. I sat on sofas and contemplated the paintings around me, thinking of the emotions they were bringing to light so I could later write about it to talk about in our theatre piece.

“I spent a lot of the journey sitting and observing things happening around me. It was interesting listening to the people’s conversations in French. It felt very peaceful.

“I took recordings of the sounds happening around me too – leaf blowers, bike bells, laughter, dogs barking.”

Day two in Rouen began with more exploring, this time of the market which sold everything you could think of from clothes and fresh food to jewellery and board games.

Keira said: “Later that morning we attended the Joan of Arc Experience. It involved us walking through several rooms with video projections, the narrative being about a fictional re-trial which looked at the evidence for and against her execution.

“On our final day we ended up going to Jardin des Plantes and I fell in love with how beautiful the gardens were. Our return to Norwich came far too quickly.”

The project was a tale of two cities and cohort Hannah took the opportunity to explore Norwich in a way she normally wouldn’t.

“I am always in Norwich and know a bit about it. I walked round the main part of the city one morning. I took photos of Chapelfield Gardens. I sat in the park and recorded some audio of the people walking past so I could create some characters out of them and their conversations.

“As I continued my walk about, I went into Norwich Cathedral and took some pics of the inside design. I’d been here before but only now paid attention to how tall it is and how captivating the stonework is.

“Walking round Anglia Square and Elm Hill, taking photos of our own fine city, which forced me to think about it in ways I never had before. On some days I decided to go out later.

“Exploring at night-time brings out a different but equally beautiful side to Norwich. Like the others in Rouen, I went to our very own film festival to see a variety of challenging local films.

“Trying to approach the city I know so well as if I was a tourist was hard, but ultimately rewarding. I’m looking forward to the creative collaboration we can make moving forwards.”

She revealed the project wouldn’t be the end of their association with Rouen.

“We’re making plans for a theatre company to visit The Garage and deliver some workshops. We’ll hopefully go back to Rouen and work with them some more too.”

The HNC Performing Arts Programme is just one of many qualifications you can earn at The Garage. Our free Introduction to the Creative Industries Programme returns in 2022.

We offer GCSEs in Dance and Drama. Our MA Performing Arts Enterprise course also launches in 2022. 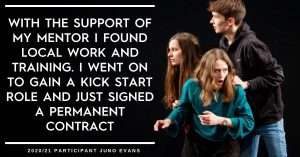 Our free Introduction to the Creative Industries Programme returns next year. Signing up to it was one of the best decisions Juno Evans has made. She said: 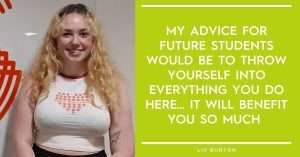 Liv Burton joined our HNC Programme in Performing Arts course because she wanted to improve her skillset before going to university next year. The Level 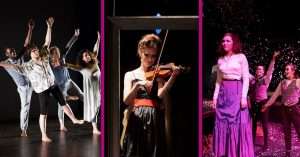 As lockdown restrictions begin to ease, and potentially for good this time, our HNC Acting Lecturer Sam Webber took a look back at a year 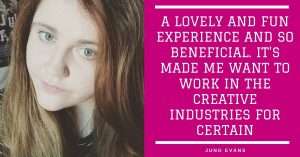