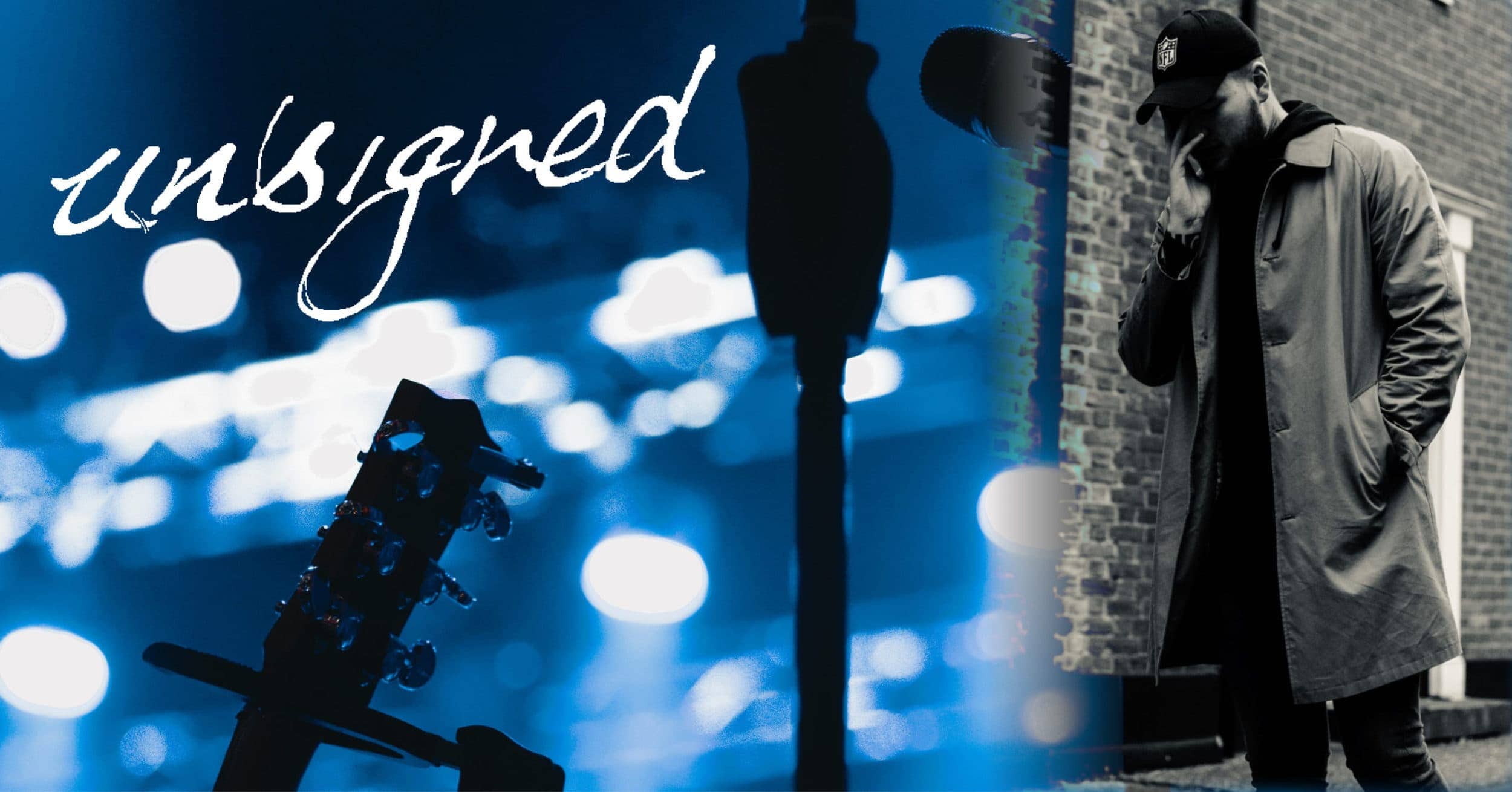 Blux J found peace from the playground bullies by hiding in his school’s music block. There’s been plenty of ups and downs since then, including spending a year-and-a-half homeless. Music was always the thing that made him think he had something to build on. He told us how Unsigned was too good a chance to pass up.

How did you get involved with Unsigned?

The high school I went to was quite rough. If you went on the playground you’d probably get beaten up every day. In the music block I taught myself to play the guitar, the drums, I played around with a piano and eventually found myself in music production. It stemmed from there. For a long time, I was just producing.

Then in the last year or two I’ve started trying to teach myself to sing. It’s difficult, as with anything you’re learning new. I’ve never really had any proper guidance. That was another part of me coming to Unsigned. I’ve had this mentality of “I’ll learn to do everything myself” and “I can do everything myself”. Now I’m more at the stage of actually you need other people to develop and grow. Finn Doherty (one of The Garage’s patrons) shared when applications were and I jumped on it.

It’s nice because I have a family life – I’ve a son who’s three and a daughter who’s two – and a job, so I’m still getting a musical education that fits around that.… I’m just an average person and it’s difficult, but music means the world to me so I’d be a fool to waste the opportunity. My daughter went to the dance classes at The Garage, she’s not very confident but she loves them, showing the tutor her own dance moves so I’m over the moon.

How do you feel your music/skills have improved so far since starting the Unsigned course last September?

I feel like my songwriting and my own sound have come a long, long way and are becoming very refined and I’m excited to have my own sound. I’ve performed at Epic Studios, in Bishop Stortford, Ipswich, Voodoo Daddy’s Showroom but I’m excited about The Waterfront gig because it’ll be the first time I really get a chance to show the redeveloped me. I’m a lot more confident and prouder of this work I’ve made recently.

Do you feel you’ve grown in confidence as a performer and musician?

I’ve grown in confidence definitely. It’s now a case of really developing my live act to seal the deal in a way. Having discovered music through being bullied, for a big, big, big part of my life I’ve always found music very cathartic. That’s a message I want to spread. For people who are struggling with mental health, finding something that’s yours is a really helpful and therapeutic process.

I’ve been through a fair few things. My dad was very much not around (growing up), my son lives with somebody else, I was homeless for a year and a half… Thinking of where I was three years ago… The whole building process from when my son was born… Having kids and music really kicked my a**e into gear. I want to leave people with that inspiration that it can get better.

Your music has had a great response so far in terms of airplay and streams?

It’s a hard one because I don’t actually know where my music sits. I call it a rich blend of RnB and Hip Hop. I started writing two years ago. I’d record on the tracks to roughly let singers know what I’d like. I did one and my friend said “this is really good, you should do something with this”. I sent it to BBC Introducing and they really liked it and played it on the radio. It went from there.

Songwriting’s easy because it’s what I love to do so it’s not work, it’s what I’d rather be doing with my time. The more I learn, the more I realise I don’t know and I want to challenge myself, so in that sense it’s difficult. I still feel like I did when I had five or 10 streams… More people call me Blux J than by my real name, that’s the only difference.

What do you enjoy about the mentoring process?

It’s so tailored and flexible. If I think of a question, I ask my mentors and Millie (Manders) and Ben (Street) are polar opposites, chalk and cheese so I actually get two very different ideas, both work and I can pick the best of both… Millie’s really working with me on teaching me to sing and develop my voice. She’s inspiring and works hard. Ben is really, really cool. He understands what I want to do and when we talk I can see what he sees… I come away from it, tailoring what I’ve learnt to myself and I’ve resonated with that.

There’s that idea that if you do the same thing over and over you can’t expect different results, you have to change something. That’s what I feel the course mostly is, a second set of ears, feedback from people who have more experience and more knowledge and it’s nice and collaborative – “give me some homework” as well as being “I’m thinking of doing this, what do you think?”

There have been many changes due to Covid19. Have you felt able to adapt to these changes and how have you been impacted as a musician?

We continued the mentoring via Zoom. I think the pandemic has impacted everyone heavily as it affected everything from collaboration and mentoring and performing all the way to your personal life, financial situation and mental health. But I’m a strong believer that you have to just adapt to the situation and turned my focus to songwriting for now.

Have you been able to connect with other artists on the programme over the last year? Have there been any opportunities for collaboration? Do you hope to be able to work that way over the next year?

Yes, I was able to record amazing songs with some great people featuring on it all through the internet. I’m excited to release it.

What are you looking forward to about continuing on the Unsigned programme this year?

I think having mentors benefits an artist in so many ways and it feels like we will get the chance to achieve what we set out to do.

Millie and fellow professional artist Ben have been working on song development, social media necessity and construct, branding and image, set list development, vocal and performance techniques plus press packs and biographies with all the artists.

Millie said: “All the acts have been amazing to work with and they are all very different to each other. It’s been great to work with musicians who take direction well and are willing to try things differently even if they are a bit ‘out of the box’. Their attitudes towards the work they need to put in has been exemplary and we have been really enjoying the process.”

Ben added mentoring during the pandemic was challenging.

He said: “The process changed quite substantially. When face-to-face mentoring became impossible, we began to utilise Zoom to allow us to continue with the Unsigned sessions in a virtual manner. This presented its challenges with regards to aspects of the course – such as physical performance analysis and feedback. But it allowed us to focus more on song production techniques and a wider understanding of the industry and its terminology such as publishing bodies, royalty acquisition and distribution deals etc. I feel this period has been hugely beneficial for all of the artists involved with this project.”

Unsigned is a night of music from up-and-coming-young artists. Part of The Garage’s Musicians Development Programme, it’s funded by the National Foundation for Youth Music and the Norfolk Music Hub.

The project was launched to give young musicians the chance to take their music, performance and professional skills to the next level with the help of experienced professional music artists. Due to Covid19, the current cohorts got the chance to continue their mentoring into the coming year. The Waterfront gig, recording session and photoshoot will be rearranged when restrictions allow.

Love music? Check out our new Rock School for beginners and improvers which meets every Monday during term time.